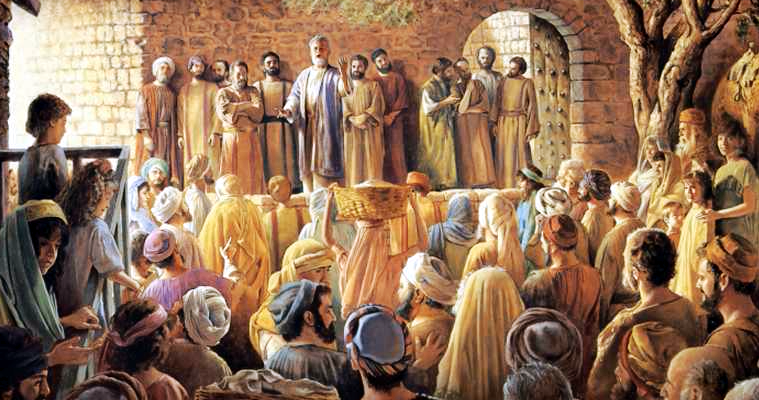 Before I was ordained, I spent my life as a graduate professor of Human Development and Family Studies at a major University–with an emphasis on Fathering. So you could say I am a bit biased when it comes to talking about parenting. Yep, I value the role men play in helping moms to raise up the next generation of kids. And although our site will have a lot to say about Woman and the Early Church, I want to expressly focus on the early Patristic period and the early Christian Fathers of the first two centuries.

Some of them you know well, at least their names, and others not so much–that’s okay. My writing will hopefully be translated well into the historic laymen’s understanding; in other words, I want to talk to you, my brothers and sisters in Christ, and not the academics among us. That’s why I left the so called “hallowed halls of academia” to have a more accessible dialogue with ordinary people who search the Internet for ordinary answers.

About my title, “Fathers Know Best”–of course this is a reference to the very popular American sitcom, “Father Knows Best”, whereby our TV dad, Jim Anderson, copes with everyday problems of his growing family (first aired October 3, 1954), dispensing wisdom from a father’s point of view. Yes, sexist and outdated, albeit humorous and even occasionally profound, I’m trying to draw a connection between this early Icon of pop TV culture and the so called “early Christian Fathers” of long ago.

Instead of a growing nuclear family, imagine dealing with an ever expanding early church. A church in its infancy, but needing the “milk” of the Gospel and a steady diet of Christian literature from the likes of Clement of Rome, Ignatius, Polycarp, Irenaeus, and Justin Martyr (to name but a few).

In a time when a fatherless generation is returning to their ancient roots of historic Christianity and rediscovering the writings of the “Fathers”, my prayer is that this blog will help aid you in that discovery and burning desire to be connected with an Early Faith for Today that will most certainly provide you with spiritual treasures, both old and new. And so, the journey begins … Father Michael O’Donnell

The Church Fathers and US 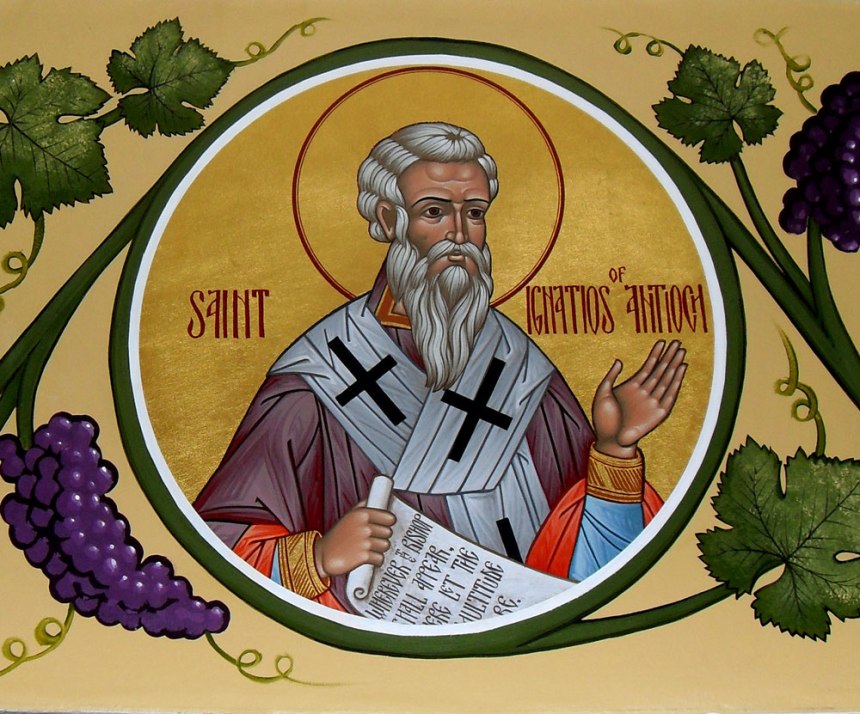 “Be Intentional About Unity”: Still-Relevant Advice from Ignatius of Antioch

In ca. 115 C.E., when he was still a relatively new bishop, Polycarp of Smyrna (died ca. 155/6) received two letters from Ignatius, bishop of Antioch. One was addressed to the entire Christian community at Smyrna (now Izmir, Turkey), the other was a more personal letter containing pastoral advice from the senior bishop to his younger colleague. Both letters were written somewhat in haste from Troas after Ignatius learned that he was to set sail almost immediately to Neapolis (Kavalla, Greece), the port of ancient Philippi (Krenides, Greece).

Ignatius had been arrested in Antioch, also known as Antioch-on-the-Orontes and Antioch-in-Syria (modern Antakya, Turkey) and was being taken under guard to Rome. Despite being accompanied by a contingent of 10 soldiers (Ign. Rom. 5.1), Ignatius was able to meet with members of Christian communities along the way, most notably at Smyrna. There he not only met, presumably for the first time, Bishop Polycarp and a number of Smyrnaean Christians, but also bishops, presbyters, and deacons from nearby Tralles (Aydin), Magnesia-ad-Maeandrum (Tekke), and Ephesus (Efes). Among them was a deacon from Ephesus named Burrhus (Ign. Eph. 2.1) who, perhaps as early as in Smyrna, served Ignatius as an amanuensis (scribe), traveling with him at least as far as Troas (Ign. Smyrn. 12.1; Ign. Phld. 11.2).

From Smyrna, Ignatius wrote a letter to each of the three churches which had sent delegations, as well as one to Rome, imploring the Christian community there not to intervene in what he hoped fervently would be his martyrdom (Ign. Rom. 4.2; 5.3; 7.2). From Troas, Ignatius, with the help of Burrhus, wrote to the church at Philadelphia which he had visited prior to arriving at Smyrna and, as noted, wrote also to the Smyrnaean church, as well as to its bishop. It is clear from Ignatius’s letter to Polycarp that he was extremely impressed with the younger bishop. Ignatius not only wishes Polycarp well but, taking on the role of mentor, gives him a great deal of pastoral advice. Perhaps the most important advice comes in the opening paragraph: “Be intentional about unity, for there is nothing better” (Ign. Polyc. 1.2).

Unity is a recurring theme in Ignatius’s letters. He calls on his readers, with “the voice of God,” to “love unity” and to “shun divisions” (Ign. Phld. 7.1–2). He even describes himself as a man “perfectly fitted to provide guidance for unity” (Ign. Phld. 8.1). One wonders what had occurred exactly in Antioch that had caused Ignatius both to experience the pain of a divided Christian community and to come up with a way to ensure intra-church unity in the future. Reading between the lines, there appears to have been conflict in Antioch over two main issues. The first was the extent to which Jewish traditions and practices should remain part of Christianity (e.g., Ign. Magn. 9.1). The second, and probably the more important, was what Christians should believe about the full humanity of Jesus. Apparently “false teachers” had come promoting the view that Jesus, the divine Son of God, had only “appeared” to have a physical body (e.g. Ign. Trall. 10.1; Ign. Smyrn. 1–8). Ignatius learned from Onesimus, the bishop of Ephesus who met with him at Smyrna (Ign. Eph. 1.3, 2.1), that similar itinerant “Docetists” (from the Greek dokein: “to seem” or “to appear”) had come to Ephesus but had not found a hearing there (Ign. Eph. 6.2, 7.1–2, 9.1). Nor, apparently had Docetism taken hold in the other Christian communities which Ignatius visited or to which he wrote. He implored his audiences, however, to be ever vigilant against “seemingly trustworthy wolves” (Ign. Phld. 2.2; cf. Ign. Eph. 7.1; Ign. Trall. 7.1; Ign. Smyrn. 6.2; Ign. Polyc. 3.1).

Ignatius’s own practical advice for ensuring unity of faith and practice was to stipulate that everything within the Christian community be done in concert with the will and authority of the bishop. He tells the Smyrnaeans:

Shun division as the origin of (all) evils. You must follow the bishop as Jesus Christ followed the Father, and follow members of the council of presbyters as if they were the Apostles. Regard the deacons as the command of God. Let no one do anything pertaining to the church apart from the bishop. Only that Eucharist is valid which is administered either by the bishop or by someone to whom he has entrusted it. Wherever the bishop is present there is the congregation, just as wherever Jesus Christ is there is the universal (catholic) church. It is not permitted either to baptize or to hold a love-feast (agape) apart from the bishop. (Ign. Smyrn. 7.2–8.2).

And, on the assumption that even his personal letter to Polycarp will be read to the whole Christian community, Ignatius reinforces the point by including in that letter the admonition: “Give heed to the bishop so that God will give heed to you” (Ign. Polyc. 6.1).

The Docetists, Ignatius tells the Smyrnaeans, “abstain from the Eucharist . . . as they do not confess that the Eucharist is the flesh of our savior Jesus Christ” (Ign. Smyrn. 7.1). Perhaps they celebrated a non-Eucharistic “love-feast.” In any case, Ignatius warns, any such meals without the bishop are dangerous, potentially schismatic if not heretical affairs.

According to Ignatius, the bishop is both the symbol and facilitator of Christian unity. His presence, or at least his permission, legitimates authentic Christian faith and practice and guards against division and disunity. Only when the whole Christian community, is paying heed to the bishop can Christian unity be assured (Ign. Smyrn. 8.1–9.2).

Not everyone at the time shared Ignatius’s vision of Christian unity centered on the person and role of the bishop. Even in Rome, it took almost another eighty years for the kind of “monarchical episcopacy” which Ignatius advocated to begin to emerge under Victor (bishop ca. 189–ca. 198/9). The importance of the person and role of the bishop to Christian unity, however, must not be underestimated nor neglected in contemporary ecumenical discussions. Even in churches which do not have an episcopal structure of governance, the unity of the particular congregation, denomination, or world-wide Communion depends on the faithful exercise of the “episcopal” or “episcopacy-like” functions of those authorized (by whatever name or title) to exercise such functions. They are “guardians of the faith;” “shepherds of the flock;” and “celebrants of the sacraments.” In other words, whether or not this is fully understood and appreciated, episkopē (the role and function of ecclesiastical oversight) exists in all churches and should be exercised responsibly even when there are no church officials actually called episkopoi (bishops).

It must also be remembered that at the time of Ignatius and Polycarp the term “bishop” was only barely beginning to be distinguished from the term “presbyter” and applied to the “overseer” of a local congregation not of a diocese. Contemporary ecumenical discussions about Ignatius’s insights regarding the role of the “bishop” as embodying and facilitating Christian unity are, therefore, very much applicable to the local congregation. Indeed, Ignatius’s model, in its historical context, applied specifically to intra-church, rather than inter-church unity. Of course, as, over time, the role of bishop evolved from that of local episkopos to that of the “overseer” of multiple Christian communities in a metropolis or even wider geographic areas, Ignatius’s insights became just as applicable to and remain so for “Dioceses,” “Synods,” “Presbyteries,” “Conferences,” “Regions,” and other ecclesiastical structures—regardless of the title of the particular judicatory’s official “Head of Communion.”

It is as important as ever, if not more so, for all “bishops” in their exercise of episkopē to “be intentional about unity”—as “there is nothing better.” The rest of us Christians are called upon to take Ignatius’s sound advice to heart also and to follow and heed our (congregational or diocesan) bishops as they carry out their God-given “oversight” of Christian faith and practice. Now, as in the time of Ignatius, Christian unity depends on it.